"Switched loop for controlling other modules, pedals, or rack effects" 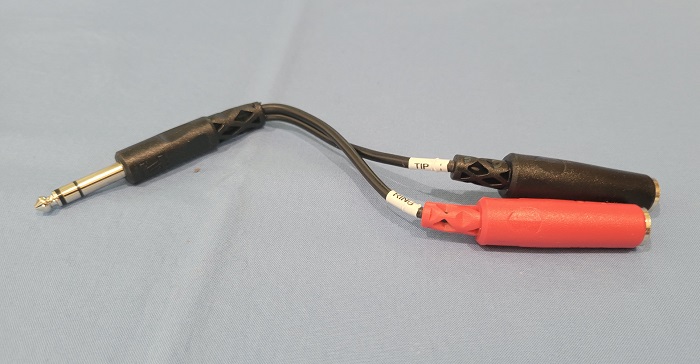 The Looper routing rack effect module allows you to switch on/off a loop of modules.  It allows you to control third party pedals with a remote footswitch, just like your GT modules.  Also good for connecting rack tuners.

The Bypass Looper is a standard switched loop module.  Everything in the loop gets controlled by a single footswitch.  While you can put other GT modules in the loop, it is most useful for controlling third party pedals and rack effects.  When you put those in the loop, you can remotely switch them on and off, just like GT modules.  The Bypass Looper pairs well with our 3U Pedal Rack, which allows you to conveniently mount your pedals in a rack and access their controls.

Now two Bypass Loopers would require 2 sets of all those controls.  But there is no way to fit that many connections into the same amount of space.  And if it takes double the space, why bother?  The solution to that problem is to use stereo jacks that can be used for more than one connection.  For instance, you could use one stereo jack for both the Send and Return for your loop.  Yes, that means you would need a stereo splitter cable so that you can cable into and out of the pedals or effects in your loop.  While there isn't enough space for the necessary 8 mono connectors, we can (just barely) squeeze in 6 connectors, or even stay with 4.  This gives rise to the different configurations.  So let's look at each one.

This one is easy to imagine.  There are 4 jacks, 2 stereo jacks for each loop.  One stereo connector handles the master In and Out for your loop.  The other stereo connector handles the Send and Return for your loop.  You would need two stereo to mono splitters for each loop to make all the connections, along with the switch control connections to turn the loops on/off.

We call this config "standard" because it is probably the easiest to use, requiring less splitters.  In this config, there are 3 jacks for each looper, 6 jacks total.  The master In and Out connections are mono so you can cable them to the rest of your chain with your normal mono patch cables.  The third jack is a stereo jack for Send and Return for your loop.  You need a stereo to mono splitter for that.  The second loop is the same.

The other configurations give you two completely independent loopers.  You can put those loops anywhere in your signal chain.  In this case, the loopers are NOT independent.  Loop 2 immediately follows Loop 1 in your chain.  You can't put anything between them.  You can still turn each loop on/off independently.  In this case, you get a mono connection into Loop 1 and a mono connection out of Loop 2.  The other 4 jacks are also mono for the two Send/Return connections for each loop.  Since all the connections are mono, no stereo splitters are needed.  You can just use your normal patch cables for all 6 jacks.

This configuration works the same as the Double Looper, mono sequential configuration.  The only difference is that the 4 mono Send/Return jacks are replaced by 2 stereo Send/Return jacks, one for each looper.  You'll need stereo to mono splitters for each loop.  The two loops are still controlled independently, but you cannot put anything between the two loops.  The main In and main Out connections are still mono, giving you 4 total jacks instead of 6.

So, as you can see, the differences are in how the loops are cabled, including whether or not they are tied together internally preventing you from putting something between them.  You'll probably want the Double Looper, Standard config, but as always, there are choices.  Note that the manual switching override switches were dropped from the 6-jack Double Looper configurations because there is not enough space for them.  You probably don't need them anyway.  If you always want the Looper off, then don't use it.  If you always want it on, then just cable the effects into your chain directly without the Looper.  Of course, the footswitch connection is there for each loop so you can switch the loops on and off when desired, which is the whole point of a looper in the first place...

Connections vary depending on configuration.  Some of the audio jacks may be mono or stereo.