The Teledrive overdrive rack effect module compares to the Nobels ODR-1 overdrive pedal.  The ODR-1 has been a secret weapon used by many Nashville artists.  It sounds great with Telecasters and bright setups, but an available bass cut option helps trim the bass for use with other guitars, perhaps those with humbuckers in particular.  A second configuration, the Teledrive20, compares to the 2020 Nordland ODR-C Custom Overdrive pedal, an updated version of the original Nobels ODR-1 from the same designer, Kai Tachibana.

The Teledrive and Teledrive20 compare to the Nobels ODR-1 and Nordland ORD-C overdrive pedals.  They provide transparent boost to mild overdrive, similar in function (but not design) to other transparent overdrives such as the Klon Centaur or Maxon GT 820.  They are probably at their best pushing a tube amp into breakup.

The ODR-1 was originally a German pedal, but is now produced in China.  The current Chinese version is very similar to the original pedal circuit.  The originals were inconsistent in the transistors and op amps that were used.  In addition to these minor production differences, one production run had some controls connected incorrectly, causing a significant degradation in tone.  The pedal was produced for quite a long time, but didn’t achieve widespread fame, possibly due to the inconsistent performance.  But some people, particularly in the Nashville “in crowd” discovered that this pedal could be outstanding if you got “a good one”.  It has apparently been a contributor to the Nashville “more Telecaster” sound for some time.

The pedal went out of production for a while, but is back again.  The unusual op amp has been replaced with a standard 4558D op amp, very similar in sound to the original.  The transistors still seem to be of various types, but again, still very similar in sound and feel to the original.  Oddly, though produced in China, the new pedals still use through-hole components instead of surface mount.

The circuit is fairly transparent, but maybe tuned for brighter instruments, such as the Telecaster.  With other guitars, it might seem a little bassy unless you dial the tone up a bit.  Mostly though, it just gives you more of what you’ve got, nice for pushing a tube amp a bit harder.  Both the original pedals and our Teledrive can pick up a bit of noise with the Volume and Gain up, along with the Spectrum dialed to the treble side.  That’s true of most boost and gain pedals, though.

The original designer of the Nobels ODR-1 pedal, Kai Tachibana, released an updated version of the Nobels ODR-1 as the Nordland ODR-C Custom Overdrive in 2020.  There were actually a couple of minor variations on it with slightly different model numbers in 2021, but we'll focus on the ODR-C.  The Nordland ODR-C was designed to retain the sound of the Nobels ODR-1, with a few tweaks.  Our Teledrive20 compares to the Nordland ODR-C.  Many of the differences between the two are in components and technical adjustments that are not audible.  But there are some changes.  A Lo Cut control was added, just like the popular mod for the ODR-1, so the bass can be trimmed.  Setting it to not trim the bass gives you the original ODR-1 tone.  A Mids control was also added.  It does almost the opposite of what the ODR-1 Spectrum control does.  Instead of raising or cutting both the highs and lows at the same time, leaving the mids alone, it leaves the highs and lows alone and either raises or lowers the mids.  Spectrum and Mids thus accomplish sort of the same thing in different ways, giving you either a mids boost or mids scoop.  If you leave the Mids control in the middle position, it gives you the same sound as the ODR-1.

A third new control is the Decompression control.  It adjusts the soft clipping.  At one extreme, it gives you the same clipping as the ODR-1.  But as you adjust it, it blends in some additional soft clipping diodes.  Normally that would have a pronounced effect on the volume and the character of the distortion.  But you don't get that.  The soft clipping occurs before the hard clipping in the circuit.  Causing the soft clipping voltage to increase doesn't make a noticeable difference because the hard clipping is still clipping at the same lower voltage.  The manual for the pedal says this control provides a more open sound (less compressed), but notes that the effect is subtle unless the Drive level is high.  We struggle to hear any difference at all adjusting this control, no matter how all the other controls are set.  Perhaps something about our test guitar(s) and amp(s) are masking this control.  It may be more audible with a different setup.   We do provide an option for different/switchable hard and soft clipping configurations.  The Decompression control should be more noticeable with LEDs used in the hard clipping.  But that also changes the character of the circuit.

The new features make the circuit just different enough that we decided to create a new board instead of jamming the new features into our old board.  As a result, we now have two configurations for the Teledrive.  The Teledrive configuration is the original Nobels ODR-1 circuit and you can still select any of our options for it.  By default it has Drive, Spectrum, and Level controls.  The Teledrive20 configuration uses the updated Nordland ODR-C circuit.  Most of the Teledrive options are available for this configuration, except for the Bass Cut option which is standard in the Teledrive20.  By default it will have Drive, Spectrum, Level, Lo/Bass Cut, Decomp, and Mids controls.  We also offer an option that gives you the Nobels ODR-1 "Plus" version.  We recommend the Lo Cut control to allow you to knock off some of the bass.  We're neutral on the Mids control, but it might be nice for small mids tweaks once you have Spectrum where you want it.  The Decompression control doesn't do much of anything for us, but YMMV.  If you've tried and liked the ODR-1 Plus version, then you may want that boost switch.  Overall, though, the original pedal with the Lo Cut option is our preferred configuration.  With four controls, it will fit into a 1.5" module, where the Teledrive20 requires 2". 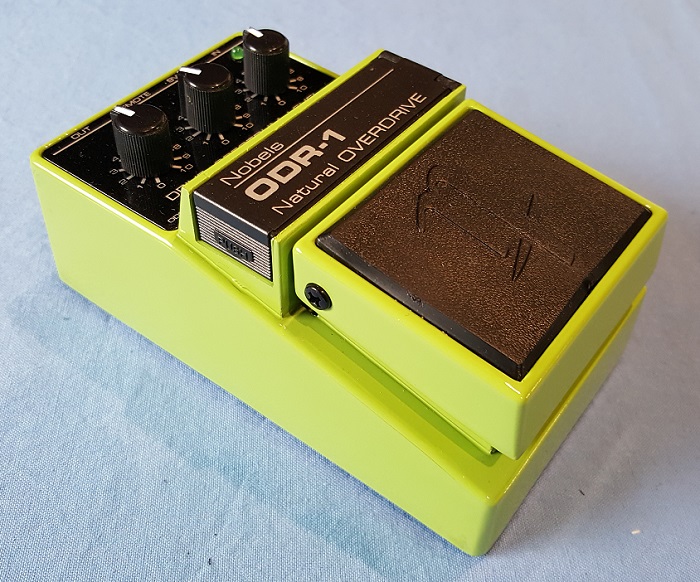 15 - 22mA, depending on configuration and options