The GT The Prince flanger rack effect module compares to the Boss BF-2 flanger, one of the more popular flangers of all time.  The BF-2 was not only one of Prince's go-to pedals.  It was also used by Robert Smith of The Cure, David Byrne of The Talking Heads, Johnny Marr of The Smiths, Billy Duffy of The Cult, Ernie Isley, Jeff Beck, and Rory Gallagher among many others.

The Boss BF-2 flanger has been so popular over the years that you're probably familiar with its sound even if you don't realize it.  It was in production from 1980 to 2001, and used pedals are still readily available today.  The Prince flanger captures that BF-2 flanger tone.  As a circuit, it is similar to most other flanger and some chorus circuits.  It uses the Panasonic MN3207 BBD to get its delay and analog flanging sound.  Of course we couldn't resist adding some options to tweak the tone, options which may make The Prince of interest even to those that don't like the BF-2.

The first option is to change out the MN3207 BBD for an MN3007 BBD.  The 3207 runs at 9V, like the BF-2.  But the 3007 runs at up to 15V, giving your signal more headroom, which generally makes for a cleaner sound.  But you won't get completely clean flanging from this circuit.  The circuit design adds soft clipping diodes, a feature common to overdrive and distortion pedals, but not usually seen in a flanger, chorus, or delay pedal where typically "cleanliness is next to godliness".  We also offer the Jet option.  It lets you switch between the normal delay time, and double speed delay time.  This can make the "jet" or "swoosh" a little more pronounced.  The third of the main options is the Style switch.  The feedback path in the BF-2 circuit filters out some of the low end, which can make it a bit metallic or harsh for some.  The Style switch gives you a second cut point which reduces the harshness a bit. 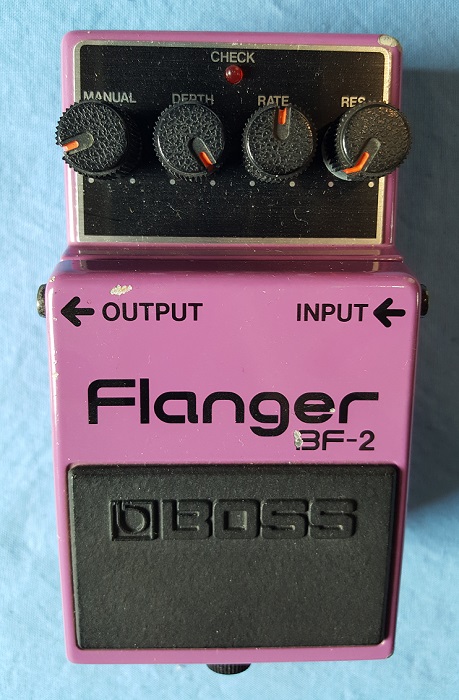