The Funkbox envelope filter rack effect module compares to the Musitronics Mu-Tron III, an effect used by Bootsy Collins, Jerry Garcia, and others to achieve their funky, grooving tones.

The Funkbox compares to the Musitronics Mu-Tron III envelope filter pedal and the closely-related EHX Q-Tron pedals, HAZ Mu-Tron III+, MuFX Tru-Tron 3X and Mu-Tron III, and the lesser known Univox Funky Filter and Monacor Effectmatic pedals.  The original Mu-Tron III was released in 1972 and was the first envelope filter pedal on the market.  It was an excellent, if quirky, pedal that quickly set the standard for future envelope filter and auto-wah pedals, a standard that many believe has never since been equaled.  Bassists such as Bootsy Collins and guitarists such as Jerry Garcia used the effect to achieve their iconic tones.  There were multiple versions of the original pedal, as well as several related pedals from Electro-Harmonix and other companies, from the 70’s right up to current new models.  But the originals seem to be preferred for their superior tone.  They used an optical part that is simply not available any longer.  There are substitute parts, some with similar specs, some with very different specs.  Here at GT we tried several different parts before we settled on one that we greatly prefer over all the others.

How does it sound compared to the originals?  That’s a difficult question to answer.  Originals are pushing towards 50 years old.  Many of them do not sound good at all.  At this point, originals often need to be reconditioned to produce good tone, or to even work properly at all.  The original Mu-Tron III we use for testing at GT works, but we suspect that it is probably past its prime.  Another consideration is that even an original in great shape is “fussy”.  It takes some time to find those good settings.  There are lots of settings that maybe aren’t particularly useful.  Finding the “good” settings to compare one unit to another can be tricky.  We could probably go buy a few more $600+ originals and compare to some aggregate version of the original tone, but we’re taking a different path.  We already know that our optical part is slightly different, so instead of trying to reproduce the exact same range of tone, we have produced what we consider to be a good envelope filter that compares to the Mu-Tron III in functionality and range of tones.  We think there is good overlap in the tones for much of the useful range of the controls, but there are some differences.  If you are a die-hard Mu-Tron III player, then the differences may be enough that you wouldn’t say the Funkbox duplicates the Mu-Tron III sound.  If you aren’t a die-hard Mu-Tron III fan and you just need to “play that funky music” with a good envelope filter similar to the Mu-Tron III, then we’ve got you covered.

The Funkbox has all the same controls and features as the Mu-Tron III, but also adds a Volume control.  Different settings of the other controls can have a major impact on the volume of the original units.  The added Volume control lets you compensate for those volume differences as you dial in different sounds.

There is also an Sweep control.  This was not found on the original unit.  Instead, the original units had a fixed resistor with a size that should be matched to the specific optical part at the heart of the circuit.  This control is normally a trim pot on the board.  There is no "correct" setting for it, it is a matter of preference.  It's meant to be a "set once" type of control so you can dial in the range of the effect to your taste.  However, it can be made an external control if you are a tweaker. 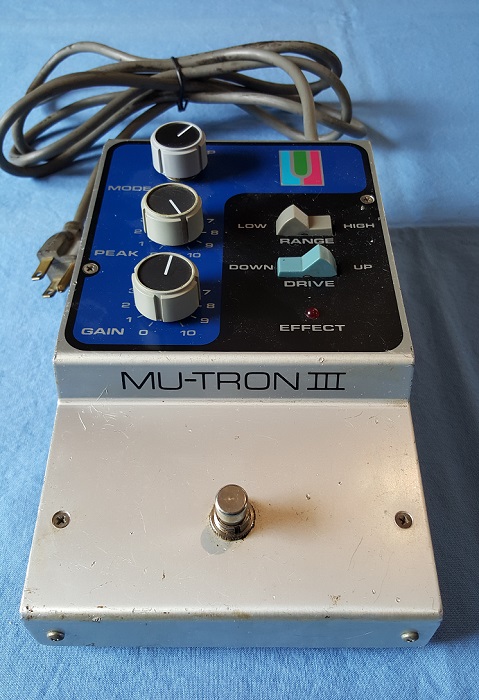