The GT OD-II distortion rack effect module compares to the Ibanez v1 OD-855 "Flying Fingers" Overdrive II.  It is similar to an MXR Distortion + (RR+) without the well-known volume drop, but not quite a Tube Screamer since it doesn't have the input and output buffers.

It's a little difficult to keep track of which Ibanez pedals have which circuits, and thus, which sounds.  For many years, Maxon made the pedals for Ibanez.  Ibanez was just a brand - they didn't make pedals.  Maxon released many of those exact same circuits under the Maxon brand.  They are 100% identical except for the cases and cosmetics.  Many of the Maxon model numbers are the same as Ibanez part numbers, but not necessary used for the same circuits.  They sometimes used similar part numbers for different circuits.  Adding further to the confusion, very different circuits were often used in different versions of the same model.  As if that isn't enough, there were also changes in cosmetics - labeling, graphics, color, etc - that didn't really correspond to circuits or models in any obvious way.  So if you have an Ibanez OD-II, you may have one of multiple circuits that had that label/model number.

Many of the classic overdrive and distortion pedals were developed and refined during the 1970's.  At that time the manufacturers were freely copying each other's designs, sometimes almost exactly, and sometimes with some changes.  Many of these pedal designs started from some of the same circuits and evolved over the years.  One of those early circuits is best known as the MXR Distortion +.  As far as distortion pedals go, it is pretty simple.  It has a single op amp stage, followed by clipping, and a volume control.  But that design results in a low-volume output.  Some manufacturers added another op amp stage after the clipping to boost the volume back up.  Numerous pedals are based on that circuit, including v1 of the Ibanez OD-855 Overdrive II.  This is the circuit in our OD-II module.  The original v1 pedal does not have the "OD-855" printed on it.  The v2 and v3 versions do have "OD-855" printed on them, but they are a different circuit.  Since all three versions are called "Overdrive II", v1 became known as the "Flying Fingers Overdrive II" due to a graphic on the side of the case that was used on the early versions of some Ibanez pedals.  Apparently some think those graphics look like "Flying Fingers", but it looks more like a dragonfly...

To continue the story a little more, v2 and v3 (GT-855) added an input transistor stage and an output transistor stage to the v1 design.  After the Overdrive II, the next pedal based on tweaks to that 4-stage circuit was called the Tube Screamer.  Of course, the Tube Screamer became wildly popular and was and still is cloned, copied, tweaked and released in many, many forms as other well-known pedals.  One of the popular mods to the Tube Screamer is to remove those transistor input and output stages, resulting in, yes, a circuit with a design much like the v1 Overdrive II of some 40+ years ago.

There are a number of these old overdrive and distortion pedals from Ibanez in particular that command very high prices because they sound so good, yet are "very rare".  While it may be true that circuits in a particular color of case with particular graphics on the outside were made a long time ago in limited numbers, it is also true that you can get that exact same circuit and sound in a case painted a different color with different graphics.  In some cases, you can get identically the same circuit, built in the same factory by the same people, with the same parts, at the same time, but branded Maxon instead of Ibanez.  Open them up and they are identical and they sound identical.  In every case, you can buy a current commercially-available pedal that has that same circuit and sounds identical.  There is nothing whatsoever that is rare about the circuit or its tone or its components.  The are all widely available if you can sort through the confusing model numbers and brands to make sure you're getting what you want.  Check out our other overdrive and distortion pedals, as well as our Pi fuzz module, and you'll see discussions similar to this one.  You'll find alternatives for all those uber-rare and uber-expensive pedals, either in other vintage pedal models, other third-party pedals, and most definitely as GT modules.  You can get those tones without paying those outrageous prices, maybe finding that you actually bought the wrong model anyway!

Since the OD-II shares heritage with the Tube Screamer, you may be interested in some of the Virago module configurations we offer.

You might think of the tone of the OD-II as falling somewhere between an MXR Distortion + and a Tube Screamer.  It has a bit more volume than the MXR, although still maybe not quite enough (see Options), and has more treble than a Tube Screamer.  It can be bright.  It is a good circuit for tweaking, so we offer a number options in case you want to change it up. 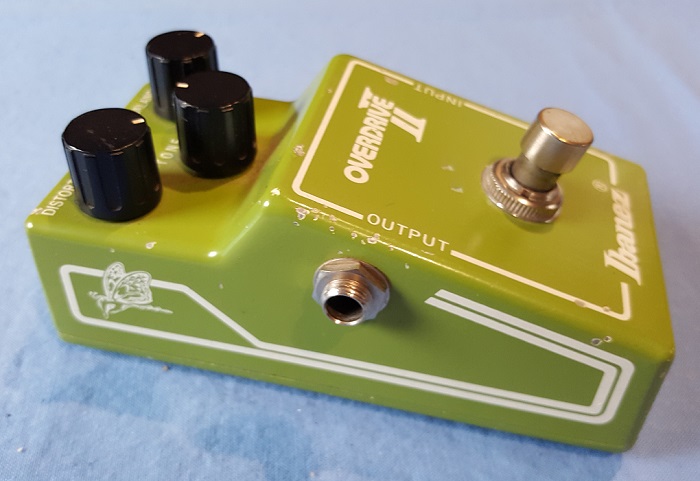