"Great distortion drive that got lost in the 90's"

The GT SuperDrive distortion rack effect module compares to the Boss SD-2 DUAL OverDrive.  Many players probably missed this pedal or weren't impressed with the overdrive channel.  But the distortion channel provides some of the best high-gain lead tones Boss ever produced.

You may have missed the Boss Dual Overdrive SD-2 pedal of the early 90's.  It was only made for a few years, and didn't really catch on with the majority of players.  The pedal is basically two completely separate effects in a single enclosure.  There is an overdrive/crunch channel and a distortion/gain channel.  They each have their own Drive, Tone, and Volume controls, and you could switch between the two channels.

Back in those days, Boss had great OD and distortion pedals, as did Ibanez/Maxon, and lots of others.  Players had plenty of good choices.  Perhaps that is why the SD-2 didn't really catch on.  It seems a good portion of players thought the OD channel in the SD-2 was nothing special, perhaps compared to other widely-available pedals.  But the Distortion channel rocks.  Many feel it is the very best of the Boss pedals for lead, also comparing favorably to lead pedals from other manufacturers.  Since switching between OD and Distortion on the fly required you to either turn a switch or buy a second remote control/switching pedal from Boss, it wasn't convenient to use both channels, which may have also contributed to its small fanbase.

However, many players still like the OD and many of those that have tried the lead/distortion circuit love it.  Here at GT, we love this module. Both the Crunch and Gain channels are great.  The Crunch channel goes from a slight boost to a nice solid tube-like crunch.  The Gain channel goes from a light crunch up to a feedback monster high-gain tube distortion, particularly with the Extra Gain option.  The tone is thick and creamy, but remains nicely articulate with good note definition.  The Tone controls cut more highs when the Tone is turned down than they cut lows when the Tone is turned up, making it more focused on the lows.  You'll get a little noise with the Crunch/Gain and Volume up, but you don't notice it when you're playing.  We think it's best to ignore the labels of "overdrive" or "distortion", and just approach it as a couple of different "drive" effects.  Let what your ears be your guide, but don't forget those Tone knobs.  Anyway, it's a "super drive", and we really dig both channels.  The more we play, the more we smile.

We have made a few part substitutions in the circuit.  The original pedal used some cheap, "nothing special" op amps, transistors, and clipping diodes.  We have changed those out to better components.  Perhaps that contributes to why we like this circuit so much.  The advantage of these parts is that they cause less noise, a Good Thing in OD and Distortion circuits.  Plus, authentic non-counterfeit ones are available at lower cost, a Good Thing in all circuits!

We do offer some options for the circuit.  Feel free to choose a different op amp, perhaps one with even less noise than the 4559P we use by default.  The lead section of the circuit is pretty complex for a distortion circuit.  Counting input and output, it has 7 active stages.  Many distortion circuits have 1 or 2, maybe up to 4 or even 5.  It also has both hard and soft clipping.  As a result we don't really recommend changing it up too much.  Op amp swap, no problem.  Maybe some clipping diode options, if you really know the circuit and have a specific change in mind.  Otherwise, we recommend you save your customization budget for other modules. 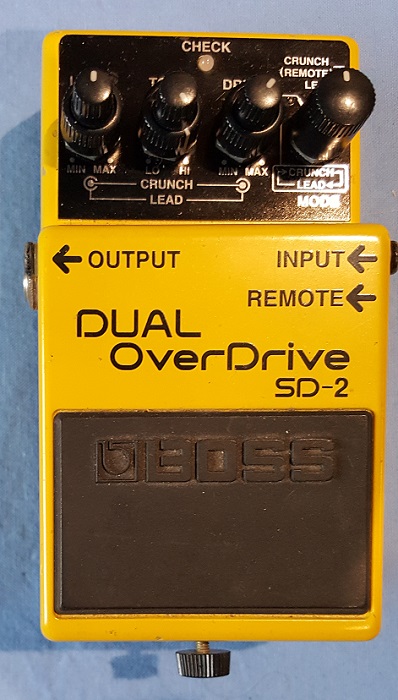 We offer several clipping options because there are multiple clipping sections in the circuit.  However, we think the stock clipping is really good and don't recommend changing it unless you are familiar with the circuit and have a good idea of a specific clipping config you would like to try.  If you are interested in different clipping configs, just let us know and we'll work through the various options we can support on our boards.  Normally this would be a 2-position switch, allowing you to select either clipping configuration.  If you'd like we can put in a 3-position switch, in which the third position is no clipping diodes.