"High gain tones that we probably shouldn’t sell to minors"

The FlatTop distortion rack effect compares to the Wampler Triple Wreck pedal.  While you can dial it down to almost clean, the high gain is where it’s at.  It’s designed to compare to Peavey 5150 and Mesa rectifier tones.

The FlatTop module compares to the Wampler Triple Wreck, which is designed to give you those killer high-gain tones you might normally find in a Peavey 5150 or Mesa, which are cousin tones to the EVH Brown Sound and Marshall high-gain tones.  All a bit different, but all a bit similar, too.  The FlatTop is a high-gain, molten metal monster.  If you crank the Level, Gain, and/or some of the Bass/Mids/Treble tone stack, you will undoubtedly overload the front-end of your amp and get a squealing out-of-control mess of feedback, oscillation, screeching, and amplified noise.  Start backing off from that point, and you’ll find your metal tones.  Screaming leads, no problem.  Chugging chunkin’ palm-muted power cords, no problem.  Super-sensitivity and harmonics – yep.  When it comes to gain, this module has more than you can safely use.

This module is about the gain.  But if you dial the gain down, you actually end up with some reasonably clean low-gain tones.  It does not clean up with your guitar volume – only with the effect Level control.  The Bass/Mids/Treble tone stack gives you opportunities for scooping the mids, boosting the bass and/or treble, or whatever you need to do to create your own sonic mayhem.  And if that isn’t enough, there is, wait for it... a boost.  It’s a funky boost.  It does give you a bit more volume, but it is actually more like a second tone stack, or maybe a “contour” or “voice” control.  It has major impacts on the tone, not just the gain and volume.  Some may not care for that boost, since it takes a while to adapt to it.  In that case, we offer a couple of our other boosts as built-in options.  Just be advised that you will likely have a limited useful range for a normal boost due to the circuit's already high output.

There is a Vintage/Modern switch that'll switch between brutal, full highs and slightly trimmed and tamed highs at the output of the circuit.  This might also help if you have noise, a definite possibility with high gain. 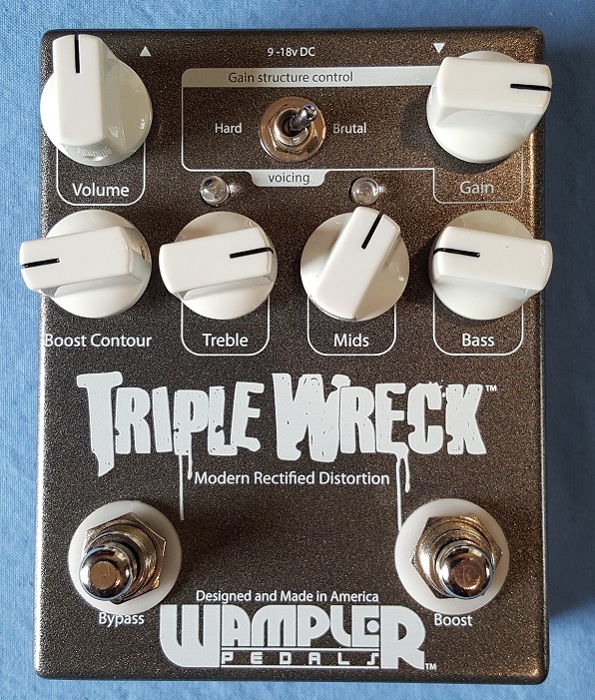