The GT Black Pearl chorus rack effect module compares to the Pearl CH-02 chorus pedal, one of the best chorus effects from the 80's, "the age of chorus".  This is a no-nonsense chorus.  It doesn't produce those over-the-top, crazy, spacey sounds that are cool for a couple of minutes, but rarely useful on stage.  It covers a good range of effect, and you should find nearly all settings useful.  Not only a "classic", but "classy".

The Pearl CH-02 Chorus was popular while it was in production, but maybe not as well known as it deserved to be.  That may be in part because synthesizers and heavily effects-laden music was finding its place in the 80's and the Pearl chorus doesn't go into the over-the-top levels of chorus that were popular then.  It is a great "working man's chorus", that provides a great chorus effect that is reasonable across all its settings.  The GT Black Pearl compares to the Pearl CH-02 and also provides a chorus that will likely meet all your chorus needs, unless you need the fast and spacey levels.

The circuit itself is very similar to the standard Boss CE-2 chorus and is somewhat unremarkable.  However, parts and values are changed up judiciously to result in a very nicely designed effect.  While the technical differences aren't that great between the two effects, the sound is quite different and probably few people would guess that the circuits are so similar.  While there are some differences in the audio path, the main differences are in the LFO portion of the circuit which is used to control the effect in the audio path.  The range of control is more different than the filtering or changing of tone.  If you need a chorus but maybe aren't a big fan of the standard Boss CE-2 and similar designs, then you might want to check out the Black Pearl.

The Black Pearl has the usual Speed and Depth controls found in chorus effects.  It also has a wet-path Tone control and a Mix control.  Since the Tone control affects only the wet path, it doesn't change the overall Tone as much as a normal Tone control.  This is especially true if you use the Mix to decrease the level of the wet signal in the output.  You can also use the Mix to turn the dry signal off, leaving you with a vibrato-like effect.

The effect is driven by an analog BBD delay chip.  The Panasonic MN3007 was used in the original Pearl pedal.  We also support the MN3207 which replaced the MN3007.  The main difference between the two is that the MN3007 runs at 15V instead of the 9V of the MN3207, which means you have a bit more headroom and a slightly cleaner signal.  Either one works great, but we give a slight edge to the MN3007.

The Black Pearl isn't a noisy effect, but nearly all analog BBD circuits will have a little noise in them.  We added an optional noise gate to the Black Pearl.  It monitors the strength of the signal coming in (the notes you are playing).  When the incoming signal drops below a certain voltage, which is meant to be the point where you can no longer hear it, then the gate completely kills the wet path where any extra BBD-related noise would be generated.  If the gate is set to the right threshold, then you won't notice that the chorus effect has been cut off at very low to inaudible volumes.  Your dry signal doesn't get cut.  We have a version of that noise gate that has an option that allows you to adjust that threshold.  Since the circuit hasn't been that noisy and it is a completely new feature for the circuit, we aren't currently offering the Noise Gate option.  It's not a matter of whether it works or not.  It's a matter of whether it's worth the cost and providing enough benefit to be useful.  If your setup is prone to noise or you otherwise have an interest, let us know and we can discuss it.

The best thing about the Black Pearl is that all the settings are potentially useful.  In our opinion, it is a well-designed circuit with a well-tuned set of controls.  As such, we don't offer many options to "mess it up".  With most chorus circuits, we offer a "Deep" control to intensify the effect.  That is already designed into the Black Pearl and doesn't need to be offered as an option.  However, there is one thing in this circuit that is set by an internal trimmer and is definitely worth considering as an external control.  Chorus (and flangers) use a delay circuit to produce a copy of the input signal slightly out of time with the original.  The amount of delay between the original and the copy has a significant impact on the effect.  Nearly the full range of the Delay trimmer in the Black Pearl produces useful settings and a slightly different chorus character.  It is definitely worth considering, although adding the extra control will cause the module to go from 1.5" to 2" wide. 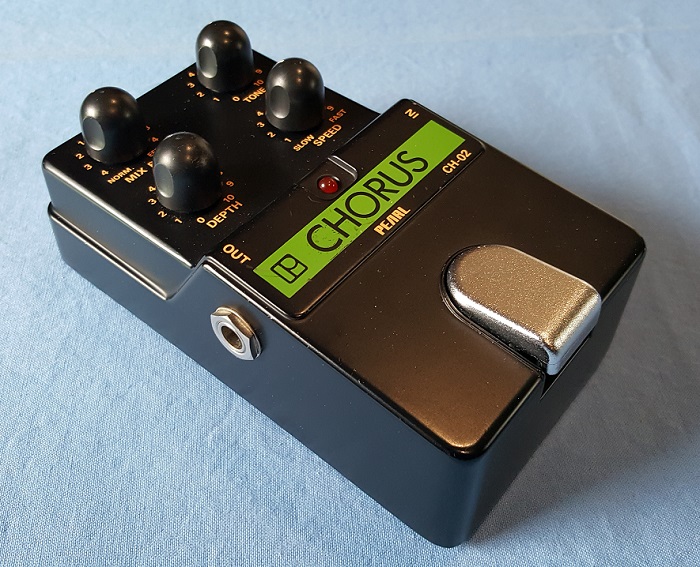