"Popular family of boosts, from clean to dirty"

The OverBoost boost rack effect module compares to a family of well-known boosts from Xotic Effects that includes their BB Preamp, AC Booster, and RC Booster pedals as well as bass and custom shop versions.  While nearly every guitar gearhead has probably tried at least one of the Xotic boosters, Andy Timmons has been endorsing them for years.  In addition to being one of the most talented technical guitarists ever, Andy Timmons has amazing guitar tone.  If he says it's good, that's pretty much the end of the discussion.  These boosts differ primarily in the range of grit and dirt they offer.  While the circuits have some commonality with the classic Ibanez Tubescreamer circuit, they also have significant differences, most notably in the tone sections.

Putting effects in categories, such as "boost", is a convenient way to help describe them, or at least start the discussion.  But categories aren't enough to really highlight how certain effects can be used.  It's easy to dismiss a "boost" as something that just makes your sound louder when you need it, like perhaps cutting through the mix during a solo.  Dismissing this group of effects as a "boost" would be a mistake.  They are like surgical instruments that can be used to finely tune your tone.

First, yes, they can boost your volume. Now that's out of the way, let's talk about what else they do that is more interesting.  You probably already know that a boost can be used to drive the front end of your amp (or other effects) harder, particularly the front end of a tube amp.  Depending on your amp and how much you drive the front end, you'll probably get more gain that you can begin hearing as something more than just a louder volume.  If you stay mostly within your amp's clean headroom, you get that "more" tone, sometimes called "transparent drive" or something similar.  It sounds like your clean tone, but a little thicker, perhaps with more harmonics and/or improved touch responsiveness.  It's sometimes described as "giving you more of what you have".  With a bit more boost, you start getting into very light overdrive, often called "grit", that killer not-quite-clean tone that pairs so well with country and blues.  A bit more boost and you start getting into dirty overdrive, crunch, and eventually distortion or even fuzziness.

Dialing in that perfect tone is a delicate balance between your pickups, boost, and amp.  Getting it really right usually requires some tweaking to the tone to maintain clarity and balance.  There are numerous pedals that can be used in that way.  However, as you may already know, if you want a wide range of control in a single effect, the controls themselves can be more difficult to adjust by fine amounts.  That's why we like the OverBoost module.  It compares to the family of Xotic boosts that divide that range of "boost" so that you end up with finer control of the boost and how it interacts with your amp.  The different configurations also have improved tone stacks to help get your tone tuned in.  A single Tone control is often not enough.  This module uses a great, well-known tone stack that features Bass and Treble controls that also help you control the mids.  By contrast the Tubescreamer's single Tone control affects the lows at one extreme and the highs at the other, with little control over those boosted mids.

So, yes, you get your boost.  But you also get a circuit that can help you tune in that ideal level of clean to dirty, along with tweaking the tone/frequencies to sound great.  Go listen to some Andy Timmons to hear how it can be mastered.  And BTW, he sounds that good live, too!

The configurations all have the same four controls for Volume, Gain, Bass, and Treble unless you choose the MB or Comp configurations or options below.

The BB Preamp was apparently named after the preamp of the famed Marshall Bluesbreaker amp.  As a note, Marshall also makes a Bluesbreaker pedal.  While the target tone may be common among all these, the circuit certainly isn't.  The BB Preamp is more like a Tubescreamer than either of the Marshall circuits, but sports a different tone stack.  There have been a few versions of the BB Preamp.  The original version used a single pair of clipping diodes, while the current model uses two pairs.  After the switch to two pairs of clipping diodes, the original single pair configuration was brought back in the Andy Timmons AT version of the pedal.  The OverBoost BB config compares to the current version of the Xotic BB Preamp.  The OverBoost AT config compares to the Andy Timmons version of the BB Preamp, which is very similar to the original BB Preamp that Andy apparently prefers.  The OverBoost Comp config compares to the BB Preamp - Comp pedal.  It allows you to switch between the original/AT single pair of clipping diodes and the current BB config with two pairs of clipping diodes.

There are a couple more BB Preamp configurations.  The OverBoost BB Bass configuration compares to the Xotic BB Bass Preamp.  Obviously, that config is tweaked slightly for bass.  Our OverBoost MB compares to the Xotic Custom Shop BB Preamp MB.  We've noted that one of the differences between the BB Preamp and the Tubescreamer circuit is in the tone stack.  Without getting into details, it's a bit like they took the control out of the Tubescreamer Tone section of the circuit and replaced it with a fixed value resistor, then added a different tone stack after that.  The original, now hardwired, tone stack still colors the tone before the new tone stack allows you to adjust it.  In the MB version of the circuit, the new Mid Boost control removes the fixed value resistor and replaces it with a new control that affects mostly the mids, a nice idea in a Tubescreamer-like circuit with accented mids.

The BB configurations are nice boosts with full tone and plenty of sustain and harmonics.  With higher levels of Gain, feedback is readily available.  There's plenty of volume to cut through and drive an amp pretty hard.  They seem particularly well-suited for classic rock, ranging from "sorta cleanish" to crunchy overdrive.  Palm mutes are nice and chunky.  The dirt cleans up but thins out as you turn down your guitar volume.  The Bass and Treble controls, as well as the optional Mids control, all have a wide range of effect.  As with most boosts and overdrives, it will gain up your noise just as much as your playing - not particularly quiet, but manageable.

Note that the extra controls of the MB and Comp configurations make them 2" wide modules. 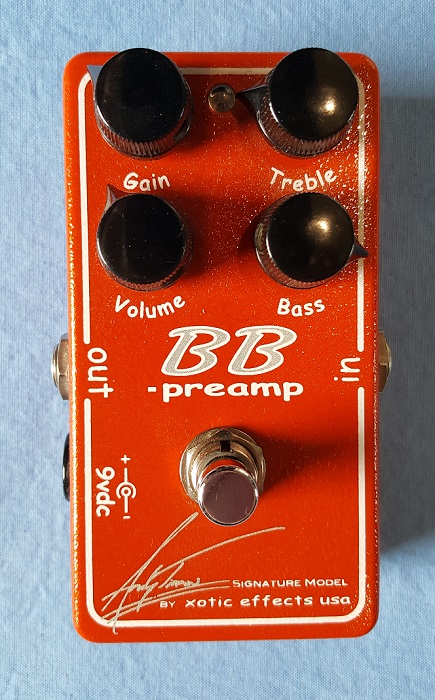 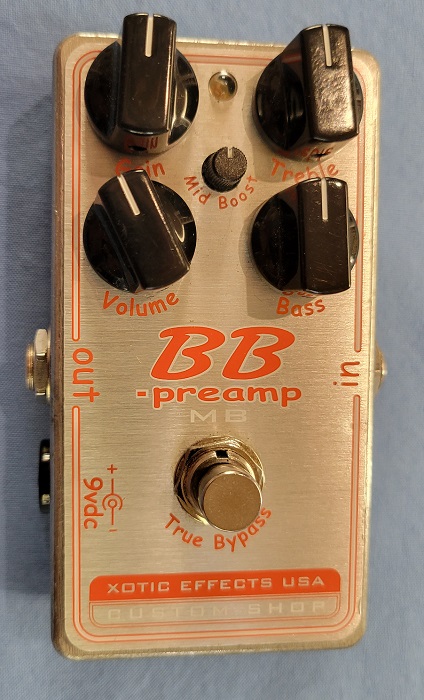 The BB configurations described above focus on the dirty side of the range of boost provided by this family of circuits.  The OverBoost RC configurations compare to the Xotic RC Booster pedals, which focus on the clean side of that range of boost.  Some of us remember it by thinking of "RC" as "really clean".  Naturally, the bass configuration is tweaked for bass.  The RC circuit differs from the BB circuit in that the fixed-value Tubescreamer-like tone section is completely left out and there are some small tone-shaping tweaks in its place.  In addition, the clipping configuration uses three pairs of clipping diodes, yielding less clipping and a cleaner base tone.

With low levels of gain, you get a nice clean boost.  As you increase the gain, you get a little grit.  At max gain, there is a low to medium level of overdrive.  As the cleanest of this family of circuits, this can be most useful in providing a bigger clean signal to push your amp, letting your amp provide more of the dirty character.  Higher Gain and Volume levels will give you a tolerable bit of noise, as you would expect.  Turning down your guitar volume will thin out the tone a bit.  The Bass and Treble controls behave as expected.  As with the other configs, cutting bass and treble yields a mids boost, while raising the bass and treble yields a mids cut. 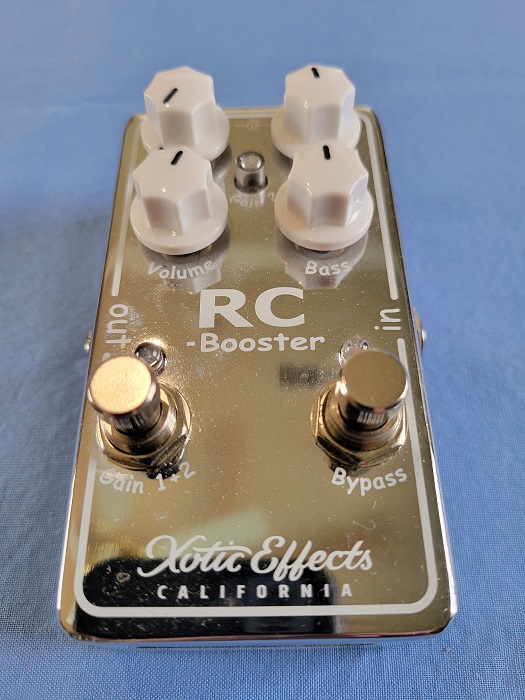 The AC configurations cover the middle of the drive range provided by this family of circuits.  The OverBoost AC configurations compare to the Xotic AC Booster pedal.  There doesn't seem to be a bass version of the AC Booster from Xotic.  At the time of writing, we have an AC Bass version of the circuit "on the slab".  If you are interested, let us know.  Some of us think of the "AC" as "almost clean".  Like the RC circuit, the AC differs from the BB circuit in that the fixed-value Tubescreamer-like tone section is completely left out and there are some small tone-shaping tweaks in its place.  The clipping configuration is different from both the BB and RC, yielding a level of drive somewhere between those two.

The AC is not as full and saturated as the BB, although it seems closer to the BB than the RC.  Compared to the BB, there's less dirt overall, and limited feedback.  There's a good bit of drive available, but it doesn't get quite to the super-crunch level.  Palm mutes aren't quite as chunky as with the BB config.  The feel is still nice and responsive, although not as sensitive as the higher gain settings of the BB.  Should go well with classic rock and blues.  With minimum Drive, you get an "almost clean" tone which can be used as a nice boost with the Volume control.  The Drive cleans up with your guitar volume, but also loses some umph and thins out a bit.  There's the usual increase in background noise as you increase the Volume and Drive, but not enough to be objectionable in most situations.  The range of the Treble control is pretty good, but won't get you into super-bright, more of a top cut kind of range.  The Bass range is similar, but feels wider, as though it is giving you a broader range of bass control, perhaps a Bass boost as you turn it up.  All in all, it's a mid-range overdrive landing nicely between the BB and RC configs. 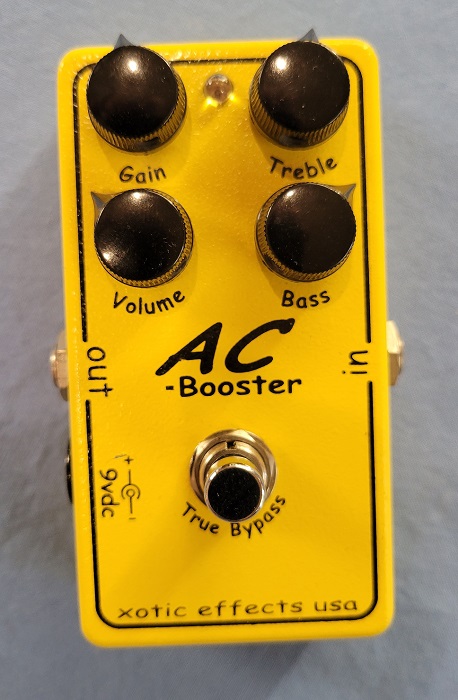 Has both input and output buffers

This module is a bit unique in a way.  There are three base configurations (with variants), BB, AC, and RC, and they are engineered to provide different, but overlapping ranges of gain/dirt in the resulting tone.  We have divided the options for this module into two sets.  The first set contains options that don't directly affect the range of gain/dirt.  The second set of options do affect the gain/dirt.  Before considering the options in the second set, we recommend you focus on selecting the base BB, RC, or AC configuration that gives you the drive range you want.  If you are really familiar with these Xotic pedals, then maybe you already know which one is best for your purposes, but want to give it a slight tweak to get you where you want to be.  That's probably the best way to consider the second set of options.

The first set of options includes:

The second set of options includes:

10 - 20mA, depending on configuration