"Good vibes from this Boss sleeper"

The VibeKing vibrato rack effect module compares to the Boss VB-2 Vibrato pedal.  The VB-2 was a dud when it was first introduced, but eventually became an expensive, rare, sought-out pedal, before it was finally re-released decades later.  It is based on the vibrato circuit in the legendary Roland JC-120 amp.

The Roland Jazz Chorus JC-120 amp provides an iconic clean amp tone, along with built in chorus, reverb, and vibrato.  It is still in production with an unchanged design since its introduction in the 70's.  In 1982 Roland/Boss introduced the VB-2 Vibrato pedal, which captures the vibrato of the JC-120 amp in pedal form.  The pedal didn't sell well.  It may have taken 4 years just to sell off their initial production run.  In 1986, it was removed from the market.  It was one of the least popular of all Boss pedals.  Of course, rarity can make something more desirable in the market.  Over the years, the price of those original VB-2 pedals began to climb.  They are still expensive, but not quite so rare as they once were.

So what's all the fuss about?  The VB-2 used some of those famous Panasonic BBD chips to create that great analog vibrato.  It is also a well-designed circuit, producing a very pleasant tone.  Rate and Depth controls provide the standard modulation controls, going from subtle to over-the-top, much like those 80's chorus pedals.  It also had two modes of operation.  In latched mode, the effect is on when you turn it on with the footswitch, and stays on until you switch it off - just like a normal pedal.  In unlatched mode, the effect is on only while you hold the footswitch down.  That allow you to use it to add vibrato to individual notes or chords, much like you would with your hands.  A Rise Time control lets you decide how fast the effect "spins up" from off to full speed (as set by the Rate control). That spin up time is pretty short, even when at the max, making adjustments with Rise Time very subtle.

At any rate, the popularity grew and Boss finally put it back into production from their Waza custom shop, creating the VB-2W Vibrato.  It is a great remake of the classic VB-2 pedal.  It adds a switch to select the original or a new custom voicing.  The difference between the two is difficult to hear unless you listen carefully for it.  The VB-2W does not use the same Panasonic BBD chips as the original.  The original used Panasonic MN3207/MN3102 BBD/clock chips.  The VB-2W uses the CoolAudio V3207D/V3102D pair instead.  The CoolAudio chips are "work alike" chips, but to our ear they aren't quite the same as the original Panasonic chips.  Our VB-2W pedal has some distortion and clipping in the delay path with humbuckers, especially when you have your guitar volume up and/or are digging in.  A gentle touch or lower output pickups are cleaner.  Of course, YMMV.  The original had the Boss always-on buffer in the signal path even when the effect was off.

That's pretty much the VB-2.  It's a great vibrato effect.  Perhaps vibrato isn't the most popular effect.  Obviously, you can create vibrato with your fret hand, no effect needed.  Or you can use a whammy bar (called a "tremolo bar" by many).  You can use the unlatched mode of the VB-2 in those ways.  Another interesting use of vibrato is to give a bit of "movement" to your tone.  In this case, you set the vibrato low and slow so that it is hardly noticeable.  You can do this same trick with chorus, tremolo, and delays.  It tends to fatten up the tone and give it a little something-something to make it more interesting.  Or you can use it sparingly, but more prominently to get a psychedelic, spacey effect, like in Lucy In The Sky With Diamonds.

Our Vibe King compares to the original Boss VB-2 Vibrato, and is built using the same great Panasonic BBD and clock chips.  Ours is "off when it is off", not forcing your tone through a portion of the circuit or a buffer.

This circuit turned out really well.  It's easy to see why it is the "Vibe King".  All the standard and optional controls work simply, as you expect. Rate and Depth controls are standard, along with Rise Time for "Unlatched Mode".  You can choose how you want the switching modes (latched vs unlatched) to work.

Depending on your setting for the optional (recommended) Delay control, you can get either a dry or very lush effect.  There is an internal Bias trimmer.  It is preset, as there is a very narrow range of settings for it that allow the effect to function.  When it is properly set, the circuit is nearly completely noise-free with the Panasonic chips.  It should also be at or near unity volume.  If you hear a little noise or you are off unity volume a smidge, you can tweak the BIAS trimmer.  Just set it where it sounds best.

Even if you aren't normally a big fan of vibrato, you may find the VibeKing a bit addictive.  You can set it shallow and slow and leave it on all the time to add a little movement to your tone.  Or use it in unlatched mode, where the effect  is controlled by a momentary footswitch to add some "big bends" here and there as you play.  When you are "unlatched", the Rise Time control adjusts how quickly the effect "spins up".  At one extreme, it is pretty much instantaneous, while at the other extreme there is a noticeable change up, emulating a rotary speaker's spin up time.

If you are a real effect geek like we are, you may know that Roland/Boss often uses custom chips in their effects.  The VB-2 used a custom BA662 op amp that is virtually unobtainable these days.  Even though it is custom, it is nearly identical to another more available vintage BA6110 op amp that they also used in some of their effects.  We use this more available op amp, along with some extra transistors that were built-in on the custom op amp to recreate the circuit of the custom op amp.  This chip is not in the audio path of the circuit.  It is only in the LFO, which generates the wave control signal.  The chip we use instead of the BA662 performs that same function the same way and does not have an impact on the tone.

However, our remote switching works differently than most pedals.  There are a couple of ways we can offer the latched and unlatched modes of operation.  Before we describe them, note that we have added a Mode toggle switch to switch between "latched" and "unlatched" operation.  "Latched" is the same as the original "latched" where the effect is either on or off.  Since the Rise Time isn't really useful for that, it is also off.  Only Rate and Depth work.  In the "Unlatched" mode, you get the "unlatched" behavior of the original, with the Rise Time functioning as expected, each time you step on the momentary footswitch.

Our first method requires two footswitches.  One footswitch turns the effect on and off, regardless of the setting of our Mode switch.  A second momentary footswitch replaces one of the normal footswitches in your 12-Button footswitch.  It works as you would expect, as long as you turn the effect on first with the on/off switch and you have the Mode set to "Unlatched".  When the Mode is "Latched", the extra momentary switch does nothing.

Our second method requires only one footswitch.  It is a momentary footswitch that also replaces one of the normal footswiches in your 12-Button Footswitch.  When you press it, it turns the effect on AND gives you the effect as long as you hold it down.  If you have the Mode set to Latched, you get the effect at whatever Rate setting you select.  With the Mode set to Unlatched, you get the Rise Time to your Rate setting.  This is very similar to the Unlatched mode of the original.  However, if you want "always on" vibrato, you either have to hold down the footswitch.  Or you can use the Override switch on the back panel to always have the effect on, which is not easily switched on/off when playing live, and makes the momentary switch useless.  It's great for highlighting a note or chord here or there,  not so great for always on vibrato, but doesn't take up an extra footswitch.

This circuit is voiced for guitar, not bass, although you may like it for bass.  It is very similar to the Boss CE-2, their famous chorus pedal.  There is a bass version of the CE-2 (CE-2B), but it works by leaving most of the bass in the dry signal, routing only the higher frequencies to the wet path.  The result is that the chorus is more subtle on bass.  But the bass itself isn't reduced, it's just not routed through the BBD path.  Since vibrato doesn't have a dry path, the same trick doesn't work for bass.  Running a lot of bass through a BBD can get muddy.  Instead of making substantial mods to the circuit to create a version voiced for bass, we left bass vibrato to our VibraChorus module.  With the dry path and mods for bass, the VB-2 and CE-2 circuit are pretty much the same, so go with the VibraChorus to get bass vibrato in one module.  Or use our Mudslinger module to split and route the low bass around the VibeKing module, just like the CE-2B does. 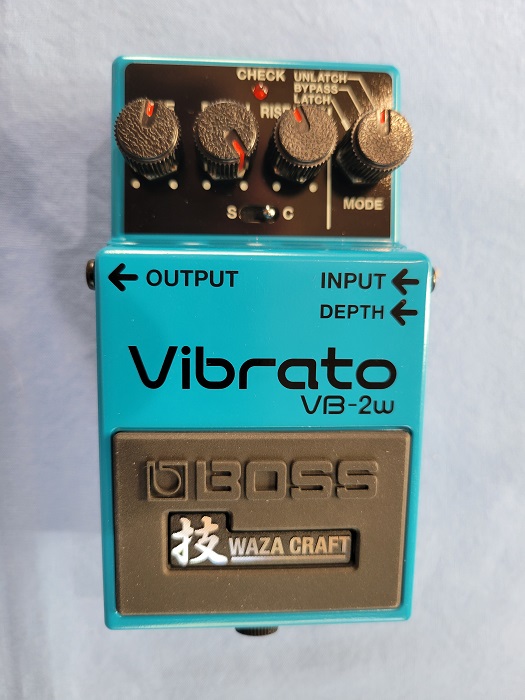 Has an input buffer

You must select either the One Footswitch or Two Footswitches option

Note that depending on your selected style of footswitching, you may have one or both of the On/Off Footswitch and Override jacks and switches

18 - 30mA, depending on configuration